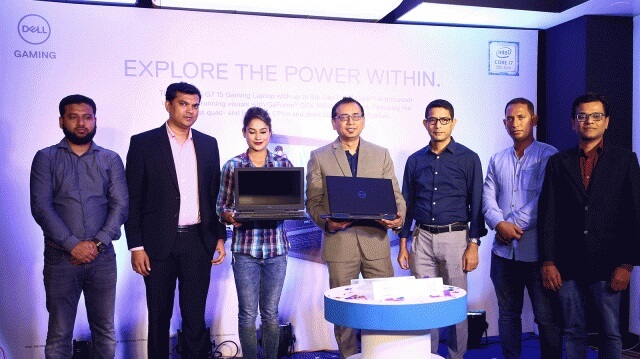 The number of Laptop users is gradually increasing in the country. Especially for graphics and games purposes. Dell authority has noticed this issue. Therefore it brings the new laptop under G-series in the domestic market. Dell has launched the gaming PC ‘Del G7 15’ model laptop under the Windows 10 operating system last Monday.

Dell officials said, after the success of the Inspiron Gaming series, all Gaming Laptop of dell has been re-introduced under  ‘Dell G series’. It has been introduced considering all classes of gamers. The budget could not be a barrier to buy this laptop of G- series, an official said.

Laptop under G- series of Dell has played an important role in creating the new movie ‘Ant-man and the Wasp’ by Marvel Studios.

This laptop includes the eighth generation Intel Core series processor and Graphics Processing Unit (GPU) of NVIDIA GeForce GTX 10 series. It controls heat sensitivity.software has been fixed to maintain the priority of content. It contains anti-glare IPS display and many other features of gaming. Dell G7 Laptop is 25mm thin. The system has a 6 GB GDDR5 video memory with 8th generation Intel Core series processor (up to Core i9 models), two fans and two storage drives.