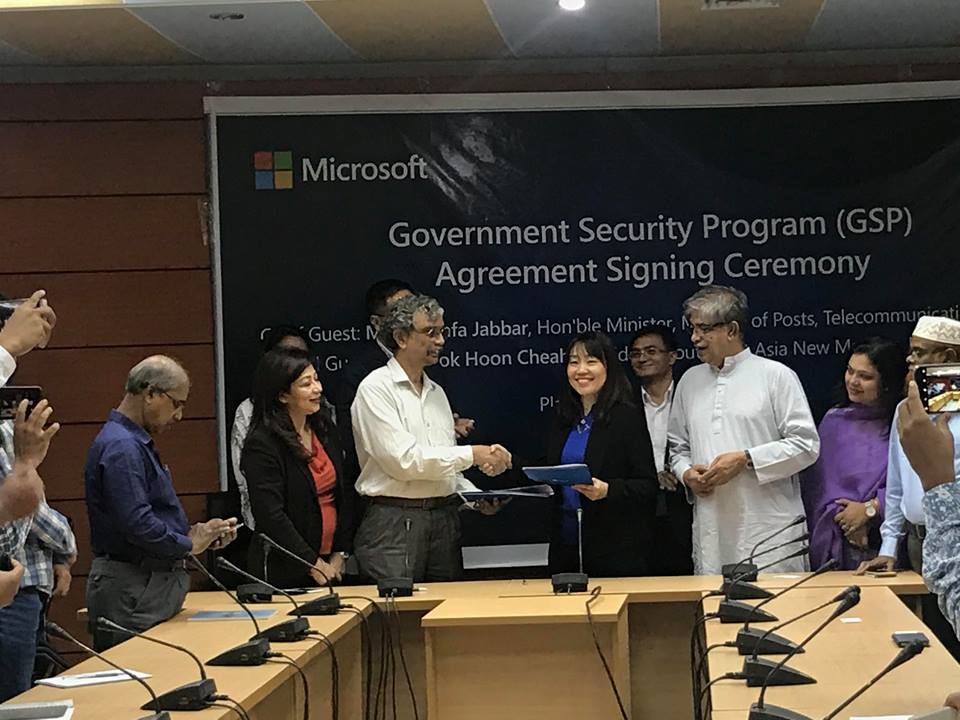 Microsoft will support the Government on Government Security Program (GSP). For this purpose, Microsoft has signed an agreement with the Ministry of Posts, Telecommunications and IT of Bangladesh Government. Under the agreement, Microsoft’s Digital Crime Unit (DCU) will provide the necessary information to the National Information Center and  CIRT department of the Ministry.

However, the cybersecurity needs to be confirmed much for the proper development of the IT sector. It is important for Bangladesh to protect online security and detect cyber threats. He said this agreement with Microsoft will help the cybersecurity of this country. Because the government is working relentlessly to strengthen national security at the virtual spaces.

Microsoft will provide information malware risk and its weaknesses in Bangladesh. The company will also help to identify the risks and threats of the  IT infrastructure of Bangladesh.

Bashar Kabir, Managing Director of Microsoft Bangladesh, Myanmar, Nepal, Bhutan and Laos said that Microsoft has a long-lasting relationship with the government of Bangladesh. This agreement will help to keep the cyber safety of the country.

Microsoft’s Southeast Asian President Suk Hoon Chiyah said that cybersecurity is a very important issue for every country and organization at the time of digital transformation. Microsoft will try to keep the country’s cyber world safe by connecting with the Cyber Threat Intelligence Program (CTIP).

Microsoft spends more than $ 100 million per year on security purposes across the world. The United States Seattle-based Microsoft’s Digital Crime Unit works in two special sectors. One of these IT infrastructure’s malware risks, boot net takedown and digital crime.